Welcome once again to our regular sortie into the world of fighting ships and this month we have a close look at a warship that was once a minelayer in the Danish Navy and is now of the Estonian Navy and on NATO duty as of 2017. We also continue with the mast and radar detail parts of our OSA 2 project.

This warship is part of the Standing NATO Mine Countermeasures Group One. At the close of April 2017, vessels of this squadron visited Liverpool and I was fortunate to be given an invitation to attend the official reception onboard EML Wambola. These receptions rarely involve a physical tour of the vessel, but a chat with the commanding officer regarding my interest in having a closer look at his command meant that before the light faded an impromptu tour was rapidly arranged.

EML Wambola was originally part of the Danish Navy and this 570 ton warship entered service on 30th January 1978 as Lossen N44, a minelayer and submarine depot ship built at Svenborg as part of the two ship Lindholmen Class, both having reinforced bows for coping with the Baltic winter and ice. Both are 45 metres in length and 8 metres beam, powered by Wichmann diesels to two shafts developing 4200bhp and a service speed of 14 knots. They were originally armed with two 20mm guns and had a capacity of 60 mines. As of now though on EML Wambola, the armament has changed to four 20mm guns and her role from minelayer to diving support vessel, although the area onboard and the facilities to accommodate the mines remains unchanged. 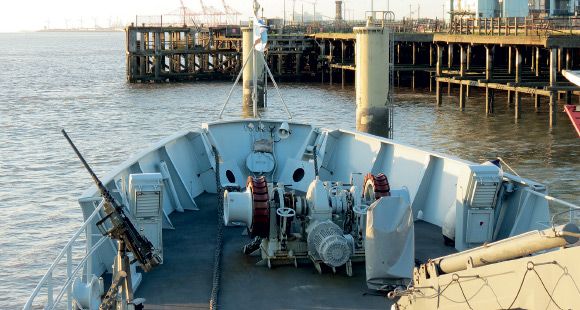 The front of the forecastle deck and unusually, 1 the windlass is right forward 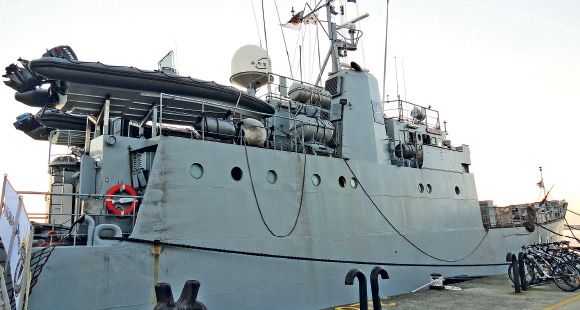 A general view of the starboard side. The minelaying deck is below the main deck. There used to be openings in the transom for the release of mines