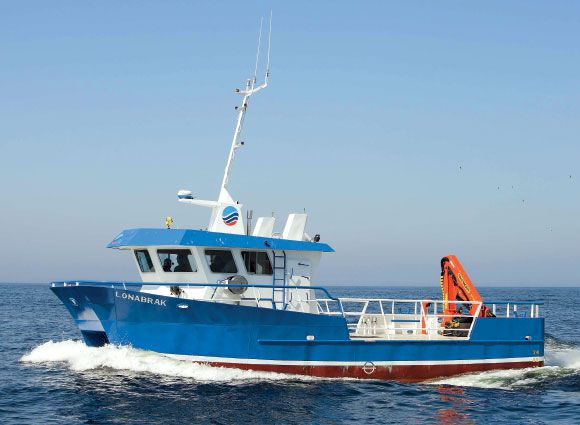 This plan describes a different type of craft than hitherto included in my contributions to this magazine, this boat having a catamaran hull which in itself will possibly be something of a novelty on the model boating ponds. Lonabrak was designed by the Macduff Ship Design Company and built at their shipyard for Scottish Sea Farms (SSF) who are based in the Shetland Islands. This workboat is 12.44 metres long with a 6 metre beam, and has conventional twin propeller drive from two Mermaid Minstral 160 HP engines running at 2500 rpm. The model plans have been drawn from illustrations on the Macduff website and some drawings provided by SSF, plus observations and sightings of the prototype when she was fortuitously sitting on the quay when being overhauled at Scalloway on the North Atlantic coast of Mainland, the largest island of the Shetland Islands, Scotland. The model plans are drawn to 1:20 scale resulting in a craft that is a bit over 24 inches long (approx. 630mm) and 12 inches (300mm) beam. It has to be said that stability on your local pond is not going to be a problem.

I chose this prototype as she does not have a bulbous bow, something that is almost standard for even the smallest of work and fishing boats nowadays, and which can be as difficult to model as it is to draw the complicated shapes of all the sections. When considering plans for a model catamaran, it has to be kept in mind that the propulsion units have to be able to fit in the two wing hulls, as such a craft by definition does not have a central hull, and so the engines and their services have to fit in these quite narrow twin hulls. However, on the plus side, the large unobstructed aft deck area allows for the provision of fairly large inspection hatches to the motors and steering mechanism, which have been indicated on the model plan. Rather than having separate openings for each, I have suggested one long access and its accompanying flush hatch.