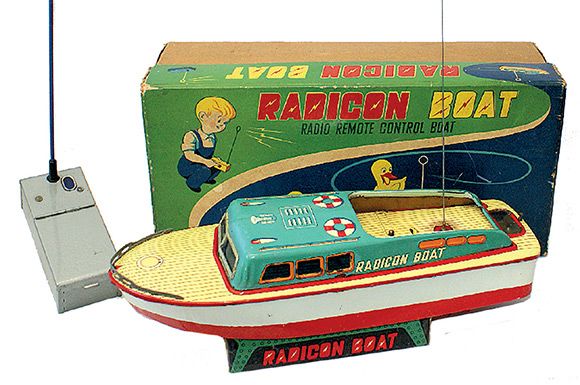 I have often thought how best to include something about radio control in this series. To attempt a comprehensive history of the subject is quite beyond my resources and the space available, whilst more specialized articles on the subject such as the conversion of old sets to incorporate modern technology whist maintaining their vintage appearance, are of limited interest when modern equipment is so much more sophisticated anyway. In the end, I decided to simply highlight some of the high points that have occurred in the development of radio control and record some of my own experiences with the technology that today we all take for granted.

Earliest technology
As it is well known, it was the Serbian inventor Nikola Tesla who first demonstrated radio control in 1898, by sending a model boat on a series of controlled manoeuvres around an indoor pool at a New York Electrical Expo’ (Flotsam and Jetsam No. 1, MB April 2013 issue), but this was hardly the start of the radio control industry or hobby as we know it. Lacking any form of amplifying device for the weak signal, early radio control operation was precarious and required precision components to make it all work, keeping it in the realm of scientists with laboratory equipment. In any case, there was not yet the demand from modellers. Occasionally, practical circuitry was published, such as the wireless controlled boat in the July 1924 edition of the Boy’s Own Paper (Flotsam and Jetsam No. 14, MB May 2014 issue) but these were no more advanced than Tesla’s original apparatus, and still relied on a spark gap transmitter and Coherer detector for the radio waves.

This simple technology lived on longer than most people realise. As late as the 1950’s, and into the early 1960’s, some toys were still being made with this form of control until legislation caught up with them as they caused interference across a wide frequency spectrum. One such toy was the Japanese tinplate Radicon Boat of the mid-1950’s which required an insulated aerial to protect the user from the hefty shock it was capable of giving. It is a valuable collector’s item now with one currently listed on a popular auction website for US$2500. A model making friend, Bob, was sufficiently interested in this early technology to make his own early radio control demonstration outfit. A small motor spins a pinwheel between high-voltage electrodes to generate the signal, and the receiver detects it wirelessly by means of a Coherer detector consisting of metal filings in a tube, with a clapper to ‘de-Cohere’ them after receipt of a signal. There are no active devices (i.e. valves or semi-conductors), yet it works well.