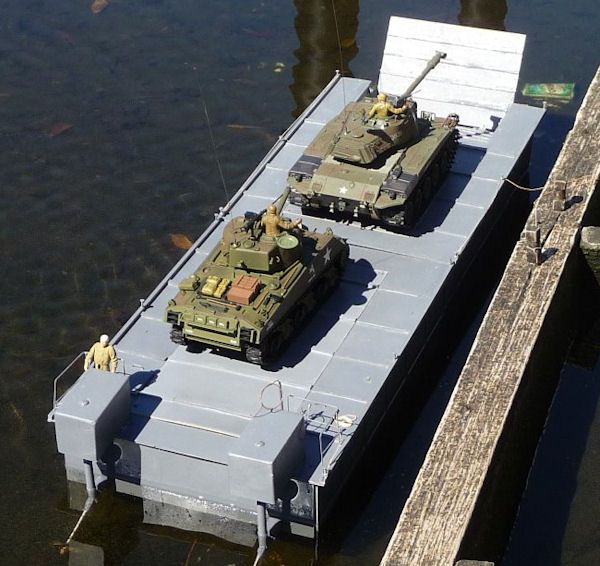 This project was an attempt to combine model boating with model armoured fighting vehicles. I am a keen member of the St. George MBC in Sydney, Australia, and enjoy sailing my various models around the club pond at Scarborough Park which is near Botany Bay. Several club members also have an interest in model tanks and regularly bring them to club meetings. Tamiya produce a range of 1:16 scale r/c tanks as kits which are very nice, but they are rather expensive. However, to our delight, Heng Long (a Chinese manufacturer) now produce an excellent range of 1:16 scale r/c tanks which are ready to run. These models are well detailed with authentic colouring, realistic operation with high manoeuvrability, smoke, a gun firing pellets and sound. All this is for a fraction the cost of an equivalent Tamiya product. So, as you will have guessed, I have joined in the club's tank fraternity with the purchase of Walker Bulldog and Sherman tanks, both used by the US Army.

There have been several articles in Model Boats on LCM (Landing Craft Mechanised) carrying tanks, but I wanted to build something which can carry several vehicles and is also something that had not been modelled before as far as I am aware.

After chatting with my fellow model tank drivers, the subject of Rhino Barges caught my attention. These were USA manufactured barges, assembled by joining steel pontoons together into a variety of sizes. I have seen pictures of these craft carrying dozens of vehicles and also in smaller sizes carrying only several. These barges were propelled by what were essentially powerful outboard motors with lifting output legs, so as to enable beach landings and shallow water operation. There are very few images available of these craft, but I managed to draw some approximate 1:16 scale plans from pictures I had seen on the Internet. The barges were very simple pontoon-like craft with a sloping ramp incorporated at the bow so as to avoid the necessity and complication of a lowering bow door as used on the more conventional LCM type of landing craft.

For ease of transport, it was decided to make the barge in two sections (fore and aft) which could be easily bolted together. Plywood was used in the construction of the sections and this was coated with polyester fibreglass resin for waterproofing and durability.

Large internal access openings are provided in the top of each section. The outboard drive units and their lifting power legs were a challenging proposition, but I decided to take a pragmatic approach by using conventional motors and driveshafts, but used a tilting platform on which to mount the motors and shafts. In this way the propeller shafts can be angled from a point where the propellers are level with the bottom of the hull or lowered so that the propellers are markedly under the waterline. This tilting motor platform is raised and lowered by a 50:1 geared motor driven winch, all controlled by a servo engaging a three position switch - centre off - left raise -right lower. A micro-switch placed at the top and bottom of the motor platform movement arc controls the end points when raising and lowering the propshafts.
To create the impression of a Z-drive leg, styrene tubing was attached from under the outboard housings and connected to the propshafts. The propshafts exit from the hull by way of a flexible boot made of a garden irrigation joint fixed into the transom through which the propshafts extend. A waterproof flexible covering boot is made by encasing it all with three layers of nitrile rubber glove fingers! The rubber joints were bound tightly with cotton thread, which was then coated with superglue.

Steering is by controlling each of the 60mm four bladed propellers with a separate speed controller. Even though the actual Rhino barges did not have a lowering bow ramp, I decided to fit one so that there was less chance of water contact with the model tanks as they were driven off the barge. This bow ramp is raised and lowered by a high torque servo with an extended arm, attached to it with cord.

The first water test was quite successful with a Sherman tank driven on to the barge then taken for a sail around the pond, then unloaded on to the shore and driven away. The only mishap was that the servo that raises and lowers the bow ramp began to stall as I attempted to raise it after unloading the tank. I suspected that this was due to insufficient current available to the servo via the BEC (Battery Elimination Circuit) within the speed controller system, so to remedy this problem an external receiver battery rather than the BEC system may be better and the length of the electrical wire connections probably didn't help either. It was also noticed that the wind had quite an effect on the controllability of the barge, probably due to its very shallow draft and flat bottom.

I am considering adding another modular centre section to allow more tanks to be carried, something that would also perhaps have occurred in real operational use. This has been a fun project and has enabled the practical integration of model boats and model tanks. It's quite a visual sight for spectators to watch several tanks driving off the barge, firing at targets on land and then returning to it for a quick getaway across the water. Perhaps more to the point, the barge is a simple, practical and pro-typical way of moving tanks and vehicles over water and it is somewhat less complicated than a conventional landing craft.

(Readers may be interested to know that in current 2014 British and Australian military service, the Mexeflote is a powered raft that is similar to this Rhino Barge concept. The Mexeflote is used to move goods and vehicles between ship and shore when a pier is not available.

Each version has three components; bow, stern, and centre, which can be fitted together as required, making the Mexeflote a truly versatile craft. The different sections allow it to be used as a raft, a floating pontoon, or even as a causeway from ship to shore.

The bow ramp is not strictly pro-typical, but does mean r/c tanks can loaded and off-loaded with ease.

A close-up of one of the drive units. The propeller can be raised and lowered by radio control. The seal on the output shaft is from the 'fingers' of rubber gloves!

Another view of the stern area.

Greg Turek and his model of the Rhino landing craft. The hull is in two sections, so an additional unit can be installed between them to increase vehicle capacity.