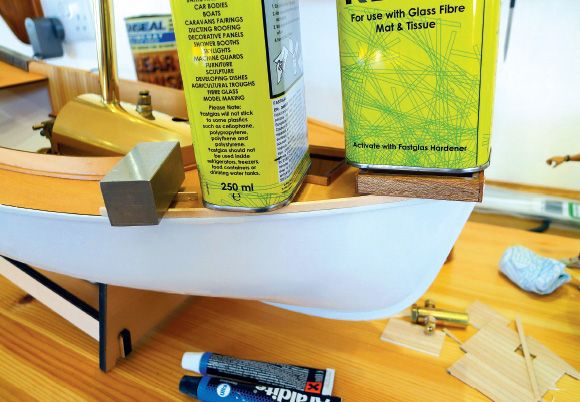 The softwood could actually be pre-bent to shape to suit the curve of the hull so all that was left once the glue was applied was to persuade it to sit on the sheer neatly.

With the major parts now finished, there remains only a few bits and pieces on the hull before the model’s final painting, varnishing and assembly.

The last major deck fittings are the two forward coamings and the top of the stem post. Initially I thought to make the stem post from convenient scrap plywood offcuts, but when I came to look at the coaming pieces I didn’t think the supplied plywood was flexible enough to bend to the shape of the hull without a real risk of it cracking. After a few dismal attempts involving steam and hot water, defeat was admitted and acceptance that the supplied plywood was just not up to the job. As a result, the kit parts were replaced with a couple of pieces of stock wood, cut to marry in to the stem post and gently curved to match the shape of the hull. These were then very easily glued in place with only a minimum of persuasion, to give a neat alternative that look close enough to the original and makes for a realistic stem post arrangement. As a further little touch, two pieces of the pre-made planked sheet were added to create a little walkway across the deck which gives just a touch of interest to break up the otherwise very long plain plywood deck. 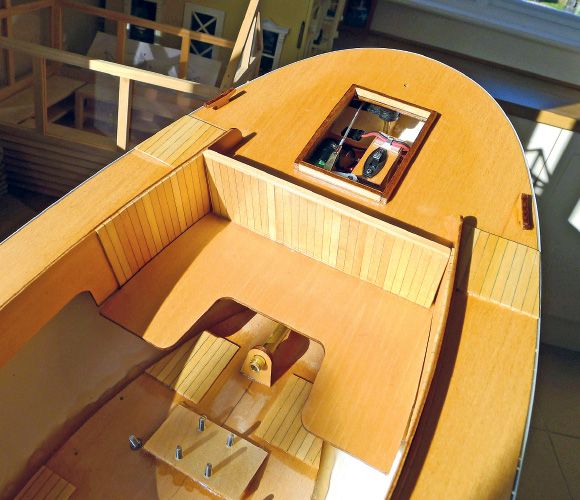 Pre-made plank sheet is a very easy and quick way of making such parts as a planked walkway without having to lay and caulk individual wood strips. Such a simple addition makes a significant difference to the overall appearance of model for very little effort.