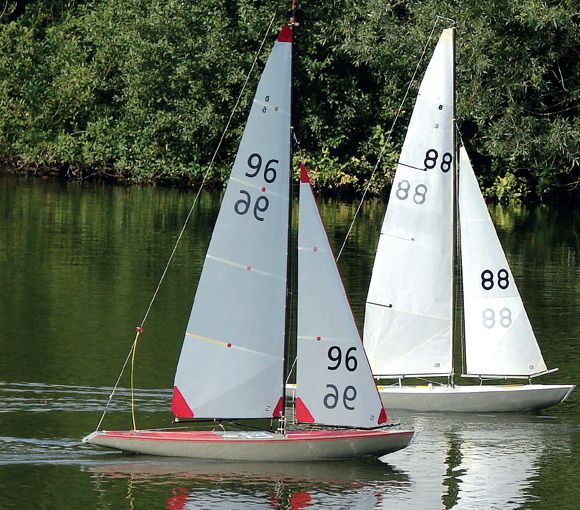 The Model Yachting Association (MYA) looks after radio and free sailing in the UK and its Council makes the decisions that make this organisation the envy of the world. The new faces on the 2017 Council, include the Chairman, Terry Rensch, Vice-Chairman Phil Holliday and the Digital Communications Officer, Austin Guerrier, who have joined the remaining members of the team together with Darin Ballington moving to one of the most important Council posts as the Racing Officer. His role involves the organisation of the radio sailing calendar for 2018, coordinating events for the nine affiliated classes and the 150 club Open, District, Ranking and National Championship events, as well as chairing committees dealing with the racing rules, which the world authority for sailing, World Sailing, change every four years following the Olympics.

This was a great success with the new members injecting enthusiasm and opening up a positive approach to promoting the sport. Terry, in particular, wants to get club members more involved in the MYA. Apart from racing matters, the District Senior Measurers and myself as Technical Officer form the Tech’ Team and we work in the background with the 120 measurers to sort out any rules issues in the international classes of; International One Metre (IOM), Marblehead, 10 Rater and A Boat, as well as the MYA’s own national classes. This involves making sure that the racing is fair, with the ‘official measurers’ helping owners to keep their boats complying with their class rules.

As the MYA Technical Officer (Roger Stollery), I am reporting on some of the current technical issues after each Council Meeting as a way of introducing news from the classes. Currently, the Tech’ Team is working on two national classes, namely the elegant 6 Metre yachts and the 36 inch class box boat (it has to fit into a standard box) and updating the relevant class rules.

The MYA’s 6 Metre class is a small scale version of the full-size rule first established in 1906 and it produces elegant boats about one and a half metres long. The rule encourages overhangs, which give the appearance of an elegant classic yacht of yesteryear and attracts those who like this traditional shape. Over the last couple of seasons, the class has been revived by its class captain Mike Ewart, and he is now putting on lots of events to support this revival. The MYA Tech’ Team is currently involved with changing the class rules to close a loophole that has recently been found, by updating the rule with the latest World Sailing Equipment Rules of Sailing definitions, plus an all new electronic registration system is being introduced.

Although the MYA is an association of clubs, we are able to contact our members and specific boat owners very easily, because boat ownership is on a database created by an annual club return. This allows for owners of boats, where there may be a specific class issue, to be contacted direct for comment on anything new and to vote on proposals to change the relevant rule. As result of this, 6

Metre owners will shortly be voting on their new class rules and bringing them up to date in the 21st Century.

Rules for the 36 Inch Class are also currently under discussion, because although the hull and appendages have to fit in an open top box 940 long x 229 wide x 279mm deep, there is one other restriction on an otherwise totally free rig design. The relevant rule has been going since the 1930’s, but some time ago a restriction was introduced on the spar materials, limiting them to timber or aluminum in order to limit the potential cost. Nowadays however, carbon tube can be just as cheap and is available in a greater range of sizes and with numerous suppliers than aluminum. It will be interesting to see whether the 36 Inch Class Owners Group vote to update their class rules to reflect this for the future.

This 36 Inch class of r/c model yacht is a great little fun boat and hard chine designs can be built very easily using basic plywood construction. Indeed, Fred Shepherd’s very comprehensive design SQUARE ONE is still in the MyHobbyStore plan service, Ref: MM 1104. The most famous of these, A WHITER SHADE OF PALE, is shown in the photograph being sailed by a six-year-old Peter Stollery, who went on to become an IOM world champion. This class is also still free-sailed under vane gear with spinnakers etc. at hard edged lakes such as those at Birkenhead, Bournville, Llandudno and Gosport, as well as being raced under radio control on other lakes throughout the country. Lots of top UK sailors have learnt to sail and had a great deal of fun sailing these little boats in their younger days. 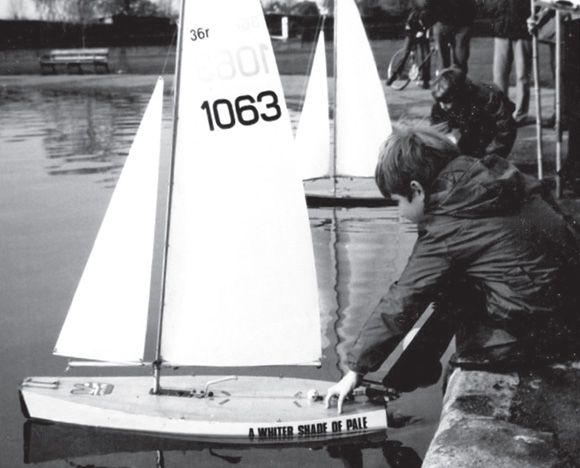 Peter’s 1979 WHITER SHADE OF PALE, a vane sailing 36 inch design still available from the
MyHobbyStore Plans range as Square One, MM1104, and is suitable for r/c 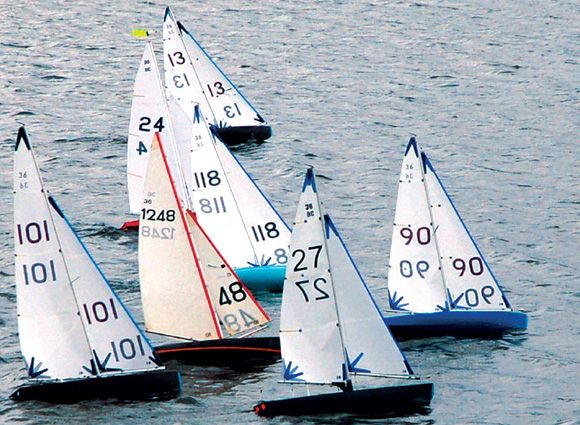 As well as involving members to take part in the decision making processes, Terry Rensch is keen to fill the vacant officer posts to complete the new forward looking MYA Council. As a long term Council member I can confirm that Council Meetings can be very rewarding and a good pay-back for the efforts made between meetings. Members interested in making a contribution should apply to the Secretary to Council, Chris Cook, email: cookcsn@sky.com