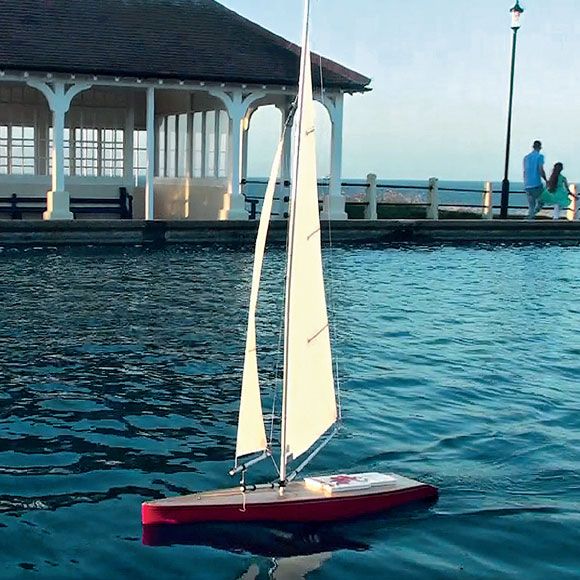 In mid-May 2016, a friend of my wife called round and told me he had something to look at in his car. I duly followed him outside and was shown a pair of racing yachts that had obviously seen better days, one red and the other blue. He informed me that a friend had sold them to him for £10 each and wanted to know if he had ‘been done’. I reassured him on that point, as even bearing in mind the state they were in, they were definitely worth more than what he had paid. He then ‘made me an offer I couldn’t refuse’ when he said, ‘If you do one of them up for me, you can keep the other one’. As you might have guessed, I jumped at this offer and placed both models in my boathouse (aka garage) to await attention. 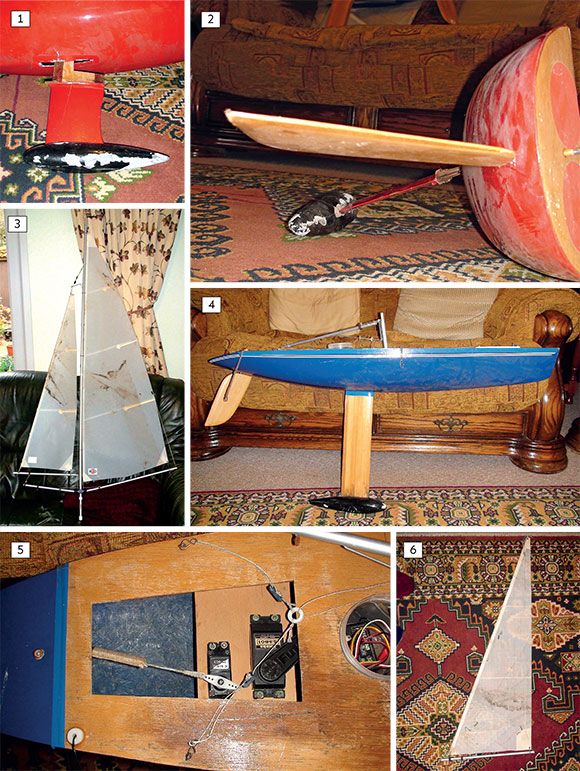 The models ‘as found’

Both models had definitely seen better days and there was no escaping that. In particular, the red one had a fractured hull, Photo 1, with the keel no longer fixed to the hull; the sail winch servo loose inside and the rudder stock bent, Photo 2. However, it did have a complete modern swing rig with plastic sheet sails which were absolutely filthy, but cleanable, Photo 3, together with a sail winch, rudder servo and a 27MHz receiver. As for the blue yacht, it’s hull was in slightly better overall condition, Photo 4, and it had a sail arm servo, a rudder servo and a 27MHz receiver fitted inside the hull, Photo 5. However, it had no mast or rigging above the mainsail boom and the only sail was a rather dirty jib complete with a boom, Photo 6. From the overall dimensions, I believe that the red yacht was probably an R36 and the blue one an International One Metre (IOM) type, but I stand to be corrected as I am no specialist in racing yachts.

Anyway, having assessed both models, the conclusion was that the red yacht would probably be the easier of the two to rebuild, because at the very least it had a full set of rigging and sails, but as work progressed, one did begin to wonder whether the right choice had been made. Very early on in the rebuild process, the name ‘Red Dragon’ was chosen, which could be something to do with its colour, and hence the title for this article. When I eventually get around to working on the blue yacht, I may well write about that experience, so watch this space.

The first step in any rebuilding and restoration project is to closely inspect the model, disassembling where necessary to find out exactly what needs to be done. After removing all the self-adhesive patches over access holes in the hull and shaking out any loose bits from inside, the now rapidly growing list of jobs came down to the following:

1. The bow bulkhead, which would at one time have mounted a foam ‘bumper’, was missing and would somehow have to be replaced.

2. The lead weighted wooden keel was split where it entered the hull and not fixed to the hull bottom (or the deck), and would need repairing and refitting.

3. The rudder stock would have to be straightened and refitted.

4. The sail winch and rudder servo needed refitting inside the hull.

6. The sails needed a good scrub with soapy water and a small repair to a tear at the bottom of the mainsail.