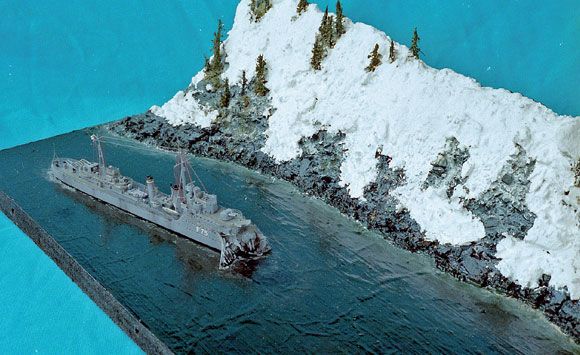 As mentioned in Part Two of this series in the May 2017 issue of MB, one of the most appealing aspects of building in small scales is the amount of ‘environmental’ detail one can include with a model ship. Having now gained a little confidence in creating harbour scenes with relatively still water, I thought the next challenge would be to include some ‘land’ in the general mix. The initial idea was to create a scene in port at a quayside with the unloading and loading of stores taking place, but when searching for 1:700 harbour items, I was disappointed as there was not much available and that which was available tended to be Japanese in style. Scratch built jetties and quaysides were a possibility, but again my lack of visual memory and suitable photos combined with the relatively few RN models available at the time of construction, led to a re-evaluation of the situation.

The diorama that is described here (and the one in the next issue), each represent a further step along my diorama-modelling development. They each make use of high quality models that were available from White Ensign Models and both took my modelling skills to a new level and are as historically accurate as research allowed at the time.

During the Second Battle of Narvik in 1941, HMS Eskimo and HMS Forester entered the narrow Rombaksfjord in search of two German Z-Class destroyers which had taken refuge there during the battle. As they entered, both ships were met by a barrage of torpedoes, one of which went right under HMS Forester. Most of the other torpedoes went wide, but one struck HMS Eskimo on her bow, blowing it almost completely off. She lay motionless in the water while the crew tried closing all the watertight doors and endeavoured to dispatch the rest of the damaged bow section to the deep. HMS Eskimo later ran astern for her whole voyage across the North Sea back to England, a remarkable feat of seamanship by her officers and crew, and after repairs, went on to have a most distinguished war record.

Looking through reference books, I found a photo of HMS Eskimo in the fiord in Norway in 1941, depicted with her bow completely blown away and one of her forward 4.5 inch gun turrets hanging precariously, and on the brink of falling into the fiord. The key problems with this project were twofold:

The former was the easier of the two as I had previous experience building N Gauge model railways (1:148 scale), and this involved creating landscapes. With regard to actually modelling ‘damage’, that was another matter and the model on which this diorama is based around is a White Ensign Models (WEM) HMS Cossack with some obvious modifications.