By continuing to use this site, you agree to our use of cookies. Find out more
Hints, Tips & Technical

Chris Drage explains how to build these miniatures - part 5 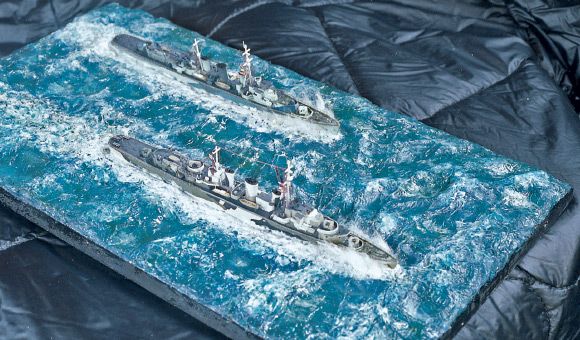 In Part Four in the previous July issue of Model Boats, I attempted to introduce a landscape into a ship-based diorama. Although the fjord-based scenes depicted proved quite successful and within the bounds of artistic licence, a realistic diorama depicting rough water had not yet been created. As most WW2 Atlantic and Arctic photographs show fairly rough conditions, it would be useful to get to grips with the techniques required. The key problem though was whether one wanted to risk using a newly released resin and etched brass kit, or an earlier plastic model still in the domestic stock. Having just received the lovely White Ensign Models (WEM) HMS Sheffield, I wanted to include her in a diorama depicting the incident when she was mistakenly attacked by Swordfish aircraft from HMS Victorious during the KM Bismarck breakout during WW2. However, not being keen on featuring such a high quality and expensive model in an experimental diorama, a pair of old Matchbox (Revell) HMS Ariadne kits were pressed into service. These had been modelled some years earlier, as the waterline RN fast minelayers HMS Ariadne and HMS Abdiel, and that which follows here describes the three dioramas subsequently created, hopefully showing the learning curve when modelling ‘white horses’. Readers will note that the third HMS Hood diorama is to 1:400 scale, but as to why? Well, that is another story as is explained later. 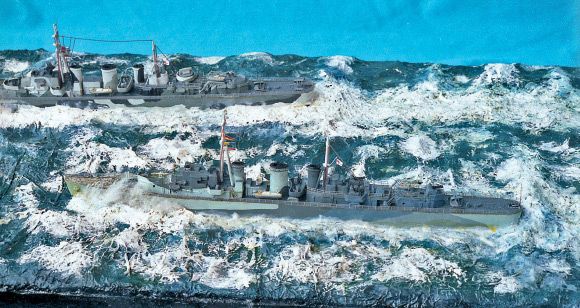 This was the first attempt at modelling a disturbed seascape and depicts these two Abdiel Class minelayers which, together with HMS Manxman, kept Malta supplied with food and materials during the desperate early-WW2 years in the Mediterranean. These ships were fast, but had more capacity to carry supplies than the available destroyers of the time. Whether the two ships ever sailed together is doubtful, except perhaps on exercise, but these models were old kits, poorly modelled and with limited additional detail work. They were early steps in my 1:700 scale modelling career, so if the technique of using Polyfilla over a roughened MDF base (which had worked okay previously) turned out to be a ghastly mess, it wasn’t the end of the world. Remembering only too well the mistakes made with the earlier HMS Polyanthus diorama (May 2017 MB) where the swells look as though they are rolling in long rows, this time lots of photos were used and available video footage studied, including the movie ‘The Cruel Sea’, to try to get the waves looking right.

A rough base of plaster was made over which was placed wet Mod Roc plaster impregnated bandages, which helped to secure the plaster and offer a smooth (ish) base for the final seascape. Once dry, small amounts of ‘runny’ plaster were added in order to add more detail such as the windblown spumes. Shallow slots were cut into the plaster for the warship’s hulls before the painting stage.

Paint was applied in the same fashion as with previous dioramas, but with the emphasis on darker, deep-water blues and greys. When the base coats were dry, a mixture of light acrylic gel was applied and white acrylic artist’s paint in order to create the wind-blown peaks of the swells and lastly the whole seascape was given several coats of gloss varnish. At this point, the models were added to the seascape and an attempt made at adding spray around their bows using teased-out synthetic fibres. This was not altogether successful, but it was the best material to hand and it added to the effect of the warship’s speed through rough seas. In summary therefore, not 100% successful, but all part of the positive learning curve.