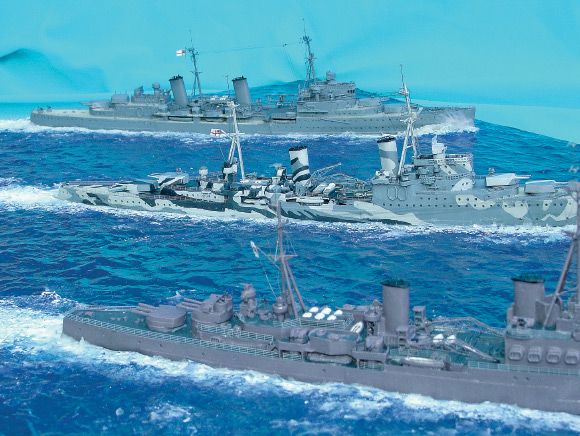 Operation Halberd 1942 featured the British cruisers Sheffield, Edinburgh and Kenya. These are 1:700 scale models and show what can be achieved just by working on a kitchen table.

The one big advantage of depicting ships in a harbour is that you can include a great deal of activity around them. Cranes may be loading or unloading, gangways might be deployed to welcome visiting launches and whalers can be moored at the stern, or alongside, awaiting a crew. Similarly, it gives you the excuse to introduce more vessels into the mix and the motivation for this diorama was twofold:

First, I wanted to include three new models, two of which were the latest Skytrex white metal castings, the other being White Ensign Models’ latest K Class destroyer multimedia kit and the second motivator? Was there an excuse for including all three in one diorama?

As it so happened during 1941, all three ships could have been in port at Alexandria in Egypt at the same time, and I had photograph of HMS Ajax sporting a most flamboyant WWI style of dazzle camouflage with HMS Kimberley (K Class destroyer) also just visible in the image. It could quite feasibly have happened that HMS Naiad would have been entering harbour after having been withdrawn from Arctic duties and sent to join these elements of the Mediterranean Fleet at that time. Mind you, some artistic licence should always be allowed with dioramas!

These were hard times in the Mediterranean for the Royal Navy. HMS Ajax lead a charmed life throughout WW2 and none more so than during the Crete campaign when without air cover, the RN had to evacuate the British forces to Alexandria as well as ensure that supplies got through to the beleaguered Nile Army. HMS Ajax had been in the heat of many actions, sustaining more near misses from bombs than anyone dared count andthis lucky ship by early-June 1941 was in Alexandria Harbour anchored in close company with HMS Kimberley, but this was to be a short respite. HMS Naiad made her debut in the Mediterranean theatre as escort to a through convoy (Operation Tiger) with HMS Queen Elizabeth and HMS Fiji in May 1941. On arrival at Alexandria, she hoisted the flag of Rear Admiral B. King in command of Force C, together with HMAS Perth and four destroyers, and soon received her baptism of fire, sustaining in one two-hour period no less than 97 bombing near misses during the Crete operations.

This is the finished diorama with HMS Ajax and HMS Kimberley at anchor and HMS Naiad steaming into the harbour.